EPSEM (Energy Production System Executable Model) is a software for the simulation and optimization of polygeneration systems with different energy carriers, like cogeneration and trigeneration plants.

The operational management of complex energy nodes with several energy carriers, like electricity, heath, cooling etc., requires a strategy that looks for the optimal integration of the different energy forms fulfilling the plant technical constraints and user demands.

Optimal working point of the plant can be sought by minimizing the plant running cost, its environmental impact or both. Interactions with external economical conditions like electricity prices and environment like renewable energy sources production, call for a high level modeling of the system that is described in terms of power flows. After the optimization procedure has defined the power flows within the plant, thermodynamic and electrical set-points can be consequently adjusted.

EPSEM (Energy Production System Executable Model) is a software for the simulation and optimization of polygeneration systems with different energy carriers, like cogeneration and trigeneration plants.

It is the result of a project that has involved different partners: Emisfera – Verbania, Net Surfing – Ivrea, Hal Services –  Borgosesia, Politecnico di Torino and  has been developed with the contribution of European funds (PAR FSC 2007-2013 A.1.3.C).

The software takes into account technical, economical and environmental aspects of an energy system in an integrated way and it can be used for different purposes as, for example:

The analysis is based on the balance of power flows of the different energy carriers and it takes into account contribution of the Renewable Energy Sources both in thermal and electric form. The software can simulate and optimize energy systems with a wide number of components connected through the following energy carriers:

The optimization procedure of EPSEM finds the production profiles of all controllable power sources, minimizing the operational cost of the plant by means of a mathematical formulation of the problem using Mixed Integer Linear Programming. In this way also technical constraints are taken into account as, for instance, the operational and ramp limits or the minimum on time and shutdown time of each components.

The software is equipped with a GUI interface for the input of the plant structure and with an editable database of power components. 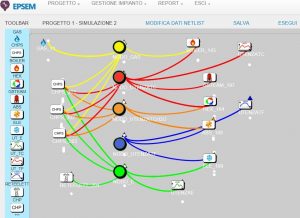 Reporting on results simulation and optimization is made in alpha-numeric form (i.e. CSV files), in graphical form on the dynamic production commitment of different units and on the share and interactions of energy carriers by means of Sankey diagrams.

EPSEM thus merges technical, economical and environmental aspects of an energy plant configuration in a single tool with the following characteristics:

Possible application of EPSEM can be the following: